(Note: This part 2 of a 3 part series of posts on Human Consciousness)

For my purposes I will view as consciousness at its most fundamental as including self-awareness that is achieved by a continuous chain of thoughts, each based largely on its predecessor. This view is compatible with the natural theory of consciousness proposed by Gerald Edelman. At the heart of Edelman’s theory is the concept of reentrant processes where individual functional areas of the brain interact in a loop repeatedly signaling each other. But this differs from a simple feedback mechanism in that with every iteration of the cycle simultaneous reentrant loops of between other parts the brain have the opportunity to contribute to the stream of consciousness. 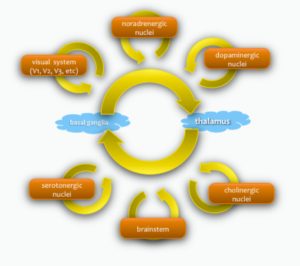 A reresentation of processess contributing to the Dynamic Core.

Edelman proposes that consciousness is a massively parallel process with reentrant operations occurring simultaneously. He has stated that the primary interaction is between the thalamic nuclei and the basal ganglia. It must be noted that more recent work has thrown doubt on the roles of the basal ganglia and the thalamus in the process of consciousness.[i] Injuries and degenerative diseases in these areas do not always correlate to a loss of consciousness.

There are many similarly functioning reentrant loops only one is the seat of consciousness. A particular combination of them manifests as a specific state of consciousness. This is what Edelman calls the Dynamic Core.[ii] Paired areas of the brain are both massively interconnected to each others neurons and also have a pathway which is capable of contributing to the dynamic core. The neural networks of each of these lesser reentrant loops are optimized to perform specific processing functions. Some of the functionally specialized neural areas that might contribute to the Dynamic Core include sensory processing, such as for visual or auditory input; memories; language processing; and value classification. These diverse components are all combined into a unified scene in the mind.